Moving the Chains to the Blockchain

Moving the Chains to the Blockchain

Note: This piece was originally posted on the Monax Industries website on April 2, 2016.

Moving the chains for the business of sport requires a move towards blockchains.

Although professional sport leagues and their affiliated teams are considered businesses under American laws that govern commerce, there are particular laws and precedents putting professional sport in a different legal consideration than ordinary business. Investigating these precedents helps to understand how owners have recently strengthened their grip on the monetary flow of sport. Here, we examine how a blockchain may add a layer of accountability to the sports industry.

This would seem to be great for the Cleveland Browns fan who hopes to one day have a winning season, however, revenue sharing imposes a pressure point on the salary of players. In professional sports, a salary cap is a rule that places a limit on the total amount of money that a team can spend on its roster of players. The higher the salary cap, the more players can be paid. Any withholding of revenue by the owners can diminish a player’s salary, saving the owner money. In fact, in February 2016, an arbitrator ordered the NFL to pay back $120 million to the NFLPA for what the league called an “accounting error”. These funds are to be distributed back to the players, at an average of $71000 per player. This is a significant amount to the undrafted rookie playing on a one year contract.

Player compensation and revenue sharing considerations aside, owners also leverage creative accounting techniques to receive public subsidies from regional governments. Recently, there has been a stadium boom in professional sports. Owners have used the “need” for new stadiums or renovations as a point of emotional leverage with the public, to receive public funding. Tangentially, the NFL head office has exempted: luxury boxes, club seating, and personal seat licenses from the revenue share. These revenue streams have recently grown in size.

In Santa Clara, the city broke ground on a $1.3 billion stadium for the San Francisco 49ers. The deal included $116 million in public funding (approved by referendum), with private capital making up the rest. However, the team disguised a $950 million loan as coming from institutions led by Goldman Sachs when actually the loan was coming from the Santa Clara Stadium Authority; a government entity. Taxpayers were tricked by the team’s creative accounting into thinking that the investment towards a new stadium was minimal when actually it was essential. As well, the taxpayers are on the hook for this money if the team goes bankrupt.

The use of creative accounting practices by teams, take advantage of players and taxpayers. Hidden revenues and expenses paint a picture of poor financial health for the team. This is done to maximize salary efficiency and public subsidization. The following diagram elaborates 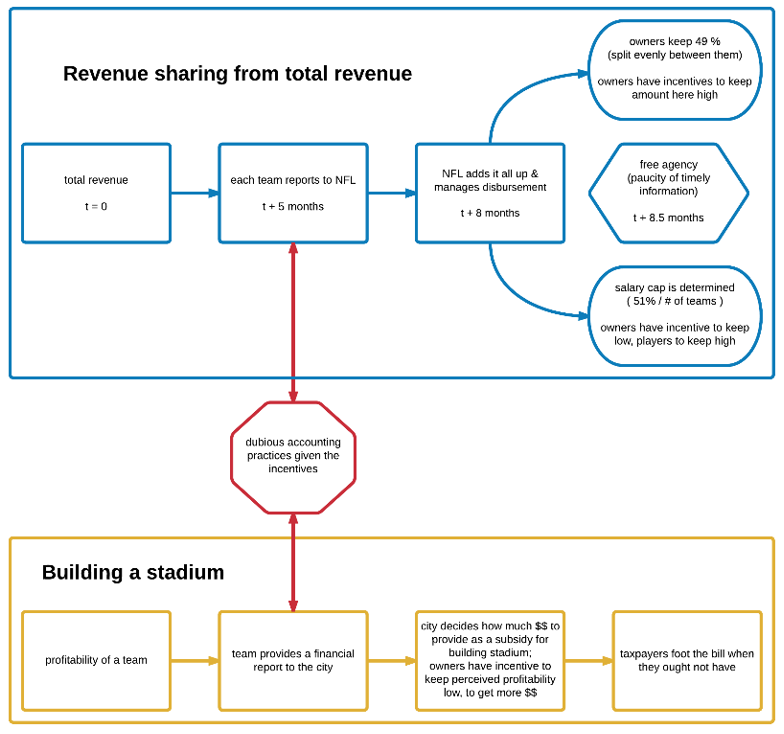 The problems identified above can be summarized as follows: multiple parties – each with different interests and motivations – need to agree on a common truth to conduct business. Creative accounting practices and/or errors skew profits in favor of teams. In the case of revenue sharing there is lack of transparency with respect to total revenues, burdening smaller teams and players salaries. In the latter example, cities overpay in subsidies.

How does a blockchain add value here? When most (if not all) aspects of teams’ portfolios are tracked on a chain, the inaccuracies are easily spotted or prevented; therefore, with the enforced transparency over the data set the creativity which accountants can practice is rather confined. For revenue sharing, players and smaller teams benefit by getting the correct cut. For stadium financing, taxpayers aren’t duped into paying for a stadium that the team owner can easily afford.

In football, “moving the chains” is synonymous with first downs and progress. Each time the team moves the chains, it gives itself a new suite of options, opportunities, and knowledge. The playbook opens up. Similarly, a blockchain opens up the playbook of sports business.

What is a blockchain?

A blockchain is a distributed ledger where transactions are validated and updated through consensus of the participants in that blockchain. For teams and players that are directly affected by the financial disclosings of other teams, blockchains offer a harmonized solution for ensuring transparency over data – which makes accountability much easier.

All stakeholders of the revenue streams in the NFL could serve as a validator on the blockchain. Each team would input their revenues on the blockchain. Total team revenues can be updated after each game or immediately as revenue is brought in. Internal auditors for the NFL teams can add an additional layer of validation over the dataset. This allows for teams to project the amount they would need to contribute to revenue sharing quickly and more accurately. Additionally, accurate projections for a team salary cap the following year will be available. 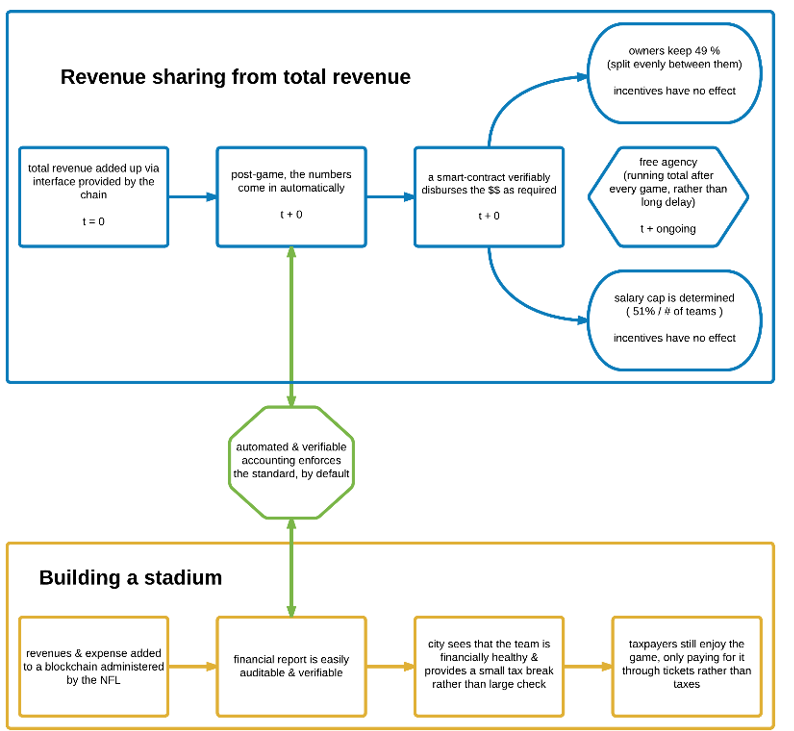 Players will benefit from the implementation of a blockchain because they can be assured that they are not victim to creative accounting; resulting in the accurate share of the revenue pie. Player unions can have peace of mind knowing that the financial documents outlining the total league revenues are accurate. This data allows the player unions to better negotiate player compensation during collective bargaining negotiations.

This technology also helps the league maintain parity; the ultimate goal of revenue sharing. First, it ensures that the richer teams are contributing their fair share into the revenue sharing fund. Smart contracts can automatically calculate contributions to the revenue sharing pie and can significantly reduce accounting errors. Small market team owners can know that the richer teams are not hiding revenues from them. Teams can also formalize their rosters sooner (nearly immediately after the Super Bowl) given access to all the required information in real-time.

Of course, this is all for nothing if teams don’t have a stadium to play in. As alluded to earlier, owners have leveraged the affection of football from fans for taxpayer dollars without much oversight of their financial integrity. The Minnesota Vikings received $506 million from public funds for the construction of their new $1.1 billion stadium while, as already mentioned, the 49ers used creative accounting to extract $950 million from Santa Clara taxpayers.

With the transparency offered by such a system deployed, cities could demand that any owner seeking funds for a new stadium participate in a blockchain that identifies audited revenue streams over several years’ time, ensuring authenticity of need for funds.

What about the owners?

Professional sports teams – like any other large business – benefit from quality real-time data; data used to support their operational decisions. The ticket department can base ticket prices on data from previous games (and even of other teams!) more easily. In addition, a blockchain can decrease the operating costs in the team’s front office.

Old business practices have caused the United States’ National Football League to suffer massive public relation hits with both players and common sports fans. Owners are seen as a old boy’s club of billionaires who have schemed their way to wealth. By using blockchain and smart contract technology, owners can maintain their place in one of the more lucrative sports leagues while innovating and embracing transparency. Not only can they change the way they are viewed, owners can also change the way the business of sports is conducted. That’s moving the chains.